Blog
You are here: Home / About Us / Blog / Frontpage Article / Associated Builders and Contractors Endorses Todd Young for U.S. Senat...

Indianapolis, IN, 9/6/16– Associated Builders and Contractors of Indiana/Kentucky (ABC) today announced that it has endorsed Todd Young’s candidacy for U.S. Senate of Indiana.

“What Todd Young has done to try and curtail government over-reach and out of control spending and even sunset such spending that seems to never end, appeals to ABC members,” says John Roop, ABC Chairman of the Board and President of Capitol City Fence.

ABC Indiana/Kentucky is the leading voice of promoting free enterprise within the construction industry. ABC’s merit shop philosophy drives member services, political advocacy, and the need for all types of industry training and education.

ABC Indiana/Kentucky President, J.R. Gaylor, notes, “Evan Bayh’s time has come and gone. We appreciate his past service to the state of Indiana but these times demand new ideas and new energy. It appears Evan Bayh’s late entry into this race is for the wrong political reasons. Todd Young is running for the right reason: to serve the people of Indiana and no one else.”

Associated Builders and Contractors (ABC) of Indiana/Kentucky represents commercial and industrial contractors, who believe in the merit shop philosophy. ABC Indiana/Kentucky and 69 other chapters around the country help members develop people, win work, and deliver that work safely, ethically, and profitably for the better of the communities in which ABC and its members work. 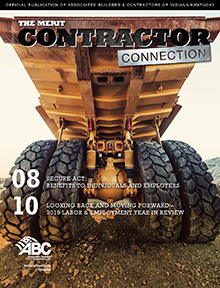