Last day to Register will be on September 13th

ABC has reserved a block of hotel rooms at the Crowne Plaza for our traveling guest – please let them know you are apart of the ABC Construction Awards Gala when reserving the rooms! 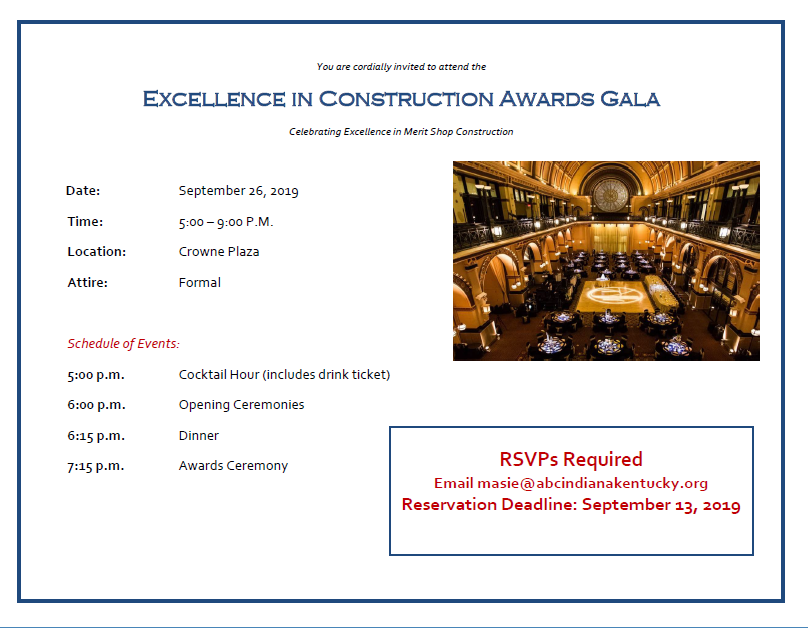 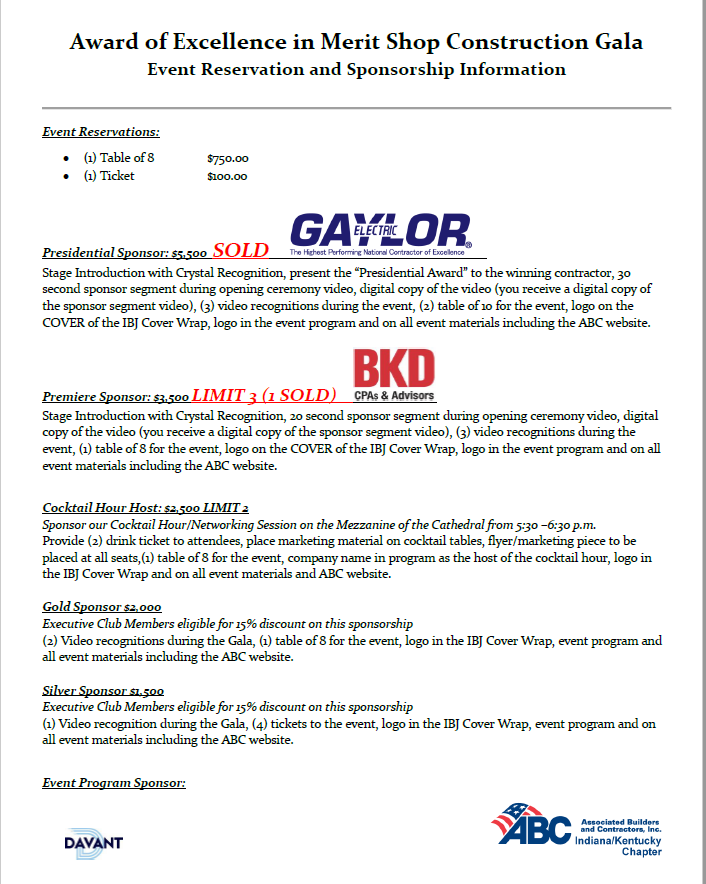 ABC INKY was thrilled to watch our graduates excel in thier respective programs and take home some recognition for following thier passion while working hard,  To see all event pics, CLICK HERE. 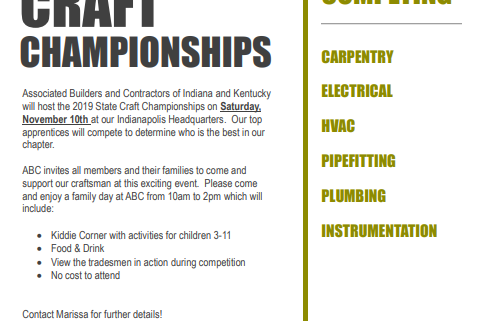 We appreciate the support of all of our amazing members! 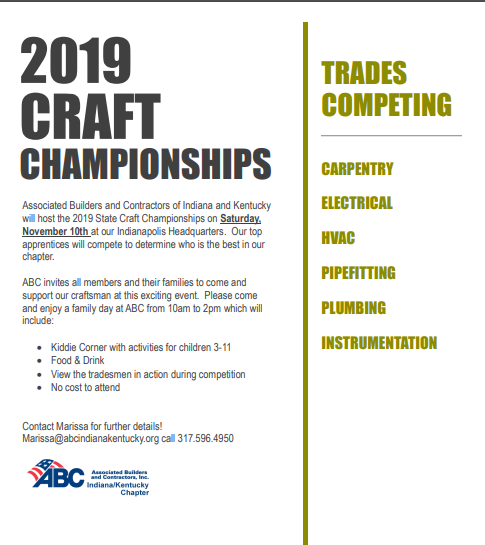 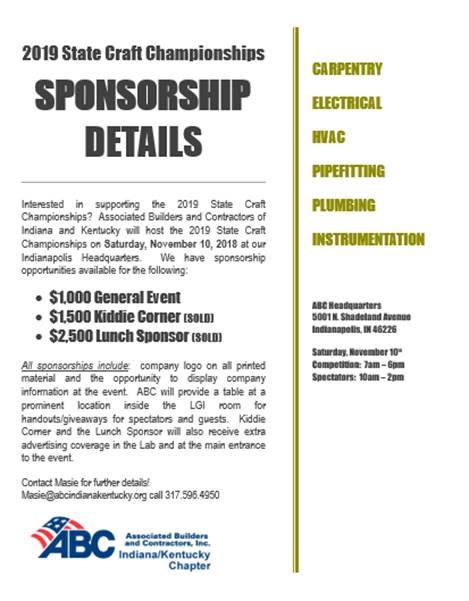 So how do you cut through all of the political posturing to make a meaningful difference when the November elections come around? You want your voice heard, but you are not sure what the legalities are. You may question, can I talk to my employees about political matters? Short answer: You cannot direct employees who to vote for or against. Period. BUT you are not helpless. ABC is here to help. I recommend two new websites just released for the very purpose of educating our members.

ABC Votes is intended for you and your management team (the restricted class of your company). It contains everything you need to make an informed decision on Election Day-Including Do’s and Don’ts for communicating with ALL of your employees and the candidate’s positions on the issues that impact our industry. You can also customize the WeBuildAmerica website to include your company logo and personalize their experience.

WeBuildAmerica is ABC’s brand new online (and mobile friendly) election portal intended for ALL employees of your company. It focuses more on the importance of voting, how and where to do so—there is even an intro video to help articulate that message.

In our world today, everything is politicized. ABC coined the phrase many years ago. ‘Get into Politics or Get out of business’. What that means is that the rules that govern how we do business comes as the result of the political/governmental process. Elections matter. They determine who the decision makers are that govern. The forces against free enterprise and our way of doing business are even stronger. So, no matter how much you don’t like the political happenings in our world, we cannot sit on the sidelines. No other organization fights the political battles for your company like ABC.

Long Beach, CA, 3/22/18– Associated Builders and Contractors of Indiana/Kentucky (ABC) brought home four medals at this year’s National Craft Championship competition in Long Beach, CA. The apprentices from Indiana/Kentucky competed alongside 170 of the association’s top craftsmen from 28 states. Apprentices can win a Gold, Silver, Bronze, or Safety medal for their performance.  “The National Craft Championships is a great opportunity to show off the exceptionally skilled and well-trained craftsmen and women that work on Associated Builders and Contractors member job-sites,” said 2018 ABC National Past Chair Chuck Goodrich, president of Gaylor Electric Inc. Indianapolis. “ABC looks forward to showing off the very best the merit shop construction industry has to offer and drawing needed attention to the terrific career opportunities available in the construction industry.”

The competitors from Indiana/Kentucky received the following awards:

Finally, Gene Senter, an Electrical 3 Instructor for the chapter, was recognized as a National Craft Instructor of the Year Finalist.

Based on the merit shop philosophy, ABC helps members develop people, win work and deliver that work safely, ethically and profitably for the betterment of the communities in which they live and work.

Associated Builders and Contractors of Indiana/Kentucky (ABC) hosted the annual Merit Shop Construction Awards Gala last Thursday night at the Scottish Rite Cathedral. The purpose of the Gala is to recognize Excellence in Merit Shop Construction. ABC Members from across the chapter submit a variety of projects to compete for the esteemed “Award of Excellence” and “Award of Merit.” Projects are evaluated on criteria including Safety, STEP- status*, and Constructability. A panel of judges (comprised of industry experts) review submissions and name winners. The Gala is a great opportunity for the construction industry to come together and celebrate the accomplishments of our ABC members. In addition to the Awards of Excellence and Merit, the ”James W. Rabold Safety Award” and the “S. Douglas Trolson Image Award” for member engagement are presented.

This year, the event featured Warren Central J-ROTC for the presentation of the colors, followed by the National Anthem sung by Joanna Reinhardt. Al Wurster, of Wurster Construction, gave the invocation. At the ceremony, more than 30 projects were recognized – 90 Awards of Excellence and 50 Awards of Merit were presented to those involved. Our Presidential Sponsor, Gaylor Electric Inc., presented Meyer Najem with the evening’s Presidential Award, as they earned the highest overall score for their Community Cancer Center North project. Paul Zuranski (Gaylor Electric Inc.) and Larry Sheets (RLTurner Corporation) were presented with Rabold awards by Mr. Rabold himself. Both Paul and Larry are exemplary models of safety in our industry and thanks to their hard work and passion, ABC contractors continue to lead the industry in safety. Finally, J.R. Gaylor presented two members (Fredericks, Inc. Contractors, and Commercial Trade Source) with the S. Douglas Trolson Awards for member engagement. Both contractors are avid supporters of the Association and our members.

*Safety Training and Evaluation Process (STEP) is a certification we encourage all members to pursue. A STEP certified contractor is a minimum of 150% safer on the job than the industry average. For more info: abc.org/STEP

Associated Builders and Contractors ABC) is a national construction industry trade association representing nearly 21,000 chapter members. Founded on the merit shop philosophy, ABC and its 70 chapters help members develop people, win work and delivery that work safety, ethically, profitably and for the betterment of the communities in which ABC and its member work. Visit us at www.abcindianakentucky.org

Associated Builders and Contractors of Indiana/Kentucky is offering a 1 year Welding Intensive course which provides foundational knowledge and skills to students interested in pursuing a Welding career. This course prepares students to successfully pass a variety of AWS certifications. ABC of IN/KY is an approved educational institution by the American Welding Society.

The phrase “pomp and circumstance” associated with graduation ceremonies was first popularized in 1622 by Shakespeare in his play Othello. During Shakespeare’s time, pomp meant a “display of magnificence and splendor” and circumstance referred to the ceremony or fuss made about a special event. The phrase stuck and most U.S. graduates enter graduation ceremonies to Sir Edward Elgar’s “Pomp and Circumstance Military Marches, Op. 39.” Although Elgar’s Military March was not played at any of the three ABC graduation events and the traditional cap and gowns were not worn, pomp and circumstance was alive and well! Better yet, we did it the ABC way!

With 149 earning ABC Craft Professional Certificates, this year’s graduating class was the largest in our history, existing first as individual chapters and now as a two-state unified chapter! Eighty-eight (88) of the Indiana graduates were also awarded Vincennes University associate degrees by Vice-President David Tucker—the highest VU graduation rate yet! The 2017 National Craft Championships medalists were also recognized during the Indianapolis event.

Special Honors
Michael Manship, Brandt Construction, was recognized as the 2017 Craft Professional of the Year
J.R. Gaylor, ABC President & CEO, was honored for 30 years of service to ABC

Just 45 minutes from Nashville, Tennessee, ABC Bowling Green graduation speaker Bob Appling, Director of the Bowling Green/Warren County Contractors Licensing Board, reminded graduates about the importance of their achievement and challenged them to always serve their communities with their craft knowledge and skills. In Louisville, Floyd Schanz, Field Operations Manager for the State of Kentucky, Division of Plumbing, congratulated the graduates on passing the state licensing exam and urged them to always help and support each other. In Indianapolis, ABC National Vice President Greg Sizemore urged graduates to be proud of their profession, continue to work hard, and serve others. Rob Griffith, ABC Indiana Trust Board Chair, closed the ceremony by asking graduates to affirm their own strengths to make an even greater positive impact on the world around them.

In closing, I want to thank all ABC training members for their participation in and support of ABC’s training programs, the craft championships, and our graduation events.

Pomp and circumstance? You bet ‘ya! The ABC Way!