Based on the merit shop philosophy, ABC helps members develop people, win work and deliver that work safely, ethically and profitably for the betterment of the communities in which they live and work.

Associated Builders and Contractors of Indiana/Kentucky (ABC) hosted the annual Merit Shop Construction Awards Gala last Thursday night at the Scottish Rite Cathedral. The purpose of the Gala is to recognize Excellence in Merit Shop Construction. ABC Members from across the chapter submit a variety of projects to compete for the esteemed “Award of Excellence” and “Award of Merit.” Projects are evaluated on criteria including Safety, STEP- status*, and Constructability. A panel of judges (comprised of industry experts) review submissions and name winners. The Gala is a great opportunity for the construction industry to come together and celebrate the accomplishments of our ABC members. In addition to the Awards of Excellence and Merit, the ”James W. Rabold Safety Award” and the “S. Douglas Trolson Image Award” for member engagement are presented.

This year, the event featured Warren Central J-ROTC for the presentation of the colors, followed by the National Anthem sung by Joanna Reinhardt. Al Wurster, of Wurster Construction, gave the invocation. At the ceremony, more than 30 projects were recognized – 90 Awards of Excellence and 50 Awards of Merit were presented to those involved. Our Presidential Sponsor, Gaylor Electric Inc., presented Meyer Najem with the evening’s Presidential Award, as they earned the highest overall score for their Community Cancer Center North project. Paul Zuranski (Gaylor Electric Inc.) and Larry Sheets (RLTurner Corporation) were presented with Rabold awards by Mr. Rabold himself. Both Paul and Larry are exemplary models of safety in our industry and thanks to their hard work and passion, ABC contractors continue to lead the industry in safety. Finally, J.R. Gaylor presented two members (Fredericks, Inc. Contractors, and Commercial Trade Source) with the S. Douglas Trolson Awards for member engagement. Both contractors are avid supporters of the Association and our members.

*Safety Training and Evaluation Process (STEP) is a certification we encourage all members to pursue. A STEP certified contractor is a minimum of 150% safer on the job than the industry average. For more info: abc.org/STEP

Associated Builders and Contractors ABC) is a national construction industry trade association representing nearly 21,000 chapter members. Founded on the merit shop philosophy, ABC and its 70 chapters help members develop people, win work and delivery that work safety, ethically, profitably and for the betterment of the communities in which ABC and its member work. Visit us at www.abcindianakentucky.org

Associated Builders and Contractors of Indiana/Kentucky is offering a 1 year Welding Intensive course which provides foundational knowledge and skills to students interested in pursuing a Welding career. This course prepares students to successfully pass a variety of AWS certifications. ABC of IN/KY is an approved educational institution by the American Welding Society.

The phrase “pomp and circumstance” associated with graduation ceremonies was first popularized in 1622 by Shakespeare in his play Othello. During Shakespeare’s time, pomp meant a “display of magnificence and splendor” and circumstance referred to the ceremony or fuss made about a special event. The phrase stuck and most U.S. graduates enter graduation ceremonies to Sir Edward Elgar’s “Pomp and Circumstance Military Marches, Op. 39.” Although Elgar’s Military March was not played at any of the three ABC graduation events and the traditional cap and gowns were not worn, pomp and circumstance was alive and well! Better yet, we did it the ABC way!

With 149 earning ABC Craft Professional Certificates, this year’s graduating class was the largest in our history, existing first as individual chapters and now as a two-state unified chapter! Eighty-eight (88) of the Indiana graduates were also awarded Vincennes University associate degrees by Vice-President David Tucker—the highest VU graduation rate yet! The 2017 National Craft Championships medalists were also recognized during the Indianapolis event.

Special Honors
Michael Manship, Brandt Construction, was recognized as the 2017 Craft Professional of the Year
J.R. Gaylor, ABC President & CEO, was honored for 30 years of service to ABC

Just 45 minutes from Nashville, Tennessee, ABC Bowling Green graduation speaker Bob Appling, Director of the Bowling Green/Warren County Contractors Licensing Board, reminded graduates about the importance of their achievement and challenged them to always serve their communities with their craft knowledge and skills. In Louisville, Floyd Schanz, Field Operations Manager for the State of Kentucky, Division of Plumbing, congratulated the graduates on passing the state licensing exam and urged them to always help and support each other. In Indianapolis, ABC National Vice President Greg Sizemore urged graduates to be proud of their profession, continue to work hard, and serve others. Rob Griffith, ABC Indiana Trust Board Chair, closed the ceremony by asking graduates to affirm their own strengths to make an even greater positive impact on the world around them.

In closing, I want to thank all ABC training members for their participation in and support of ABC’s training programs, the craft championships, and our graduation events.

Pomp and circumstance? You bet ‘ya! The ABC Way! 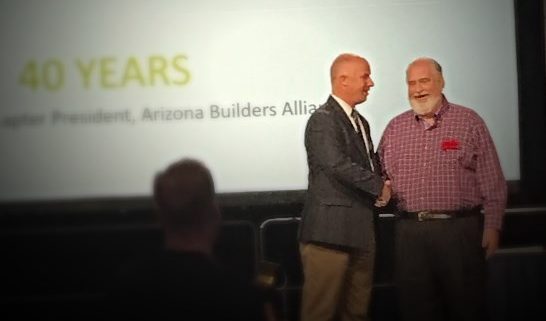 Fort Lauderdale, FL, 3/3/2016– Associated Builders and Contractors of Indiana/Kentucky (ABC) brought home the gold, along with other prestigious awards at the 30th Annual National Craft Championships. The apprentices from Indiana/Kentucky competed alongside 170 of the association’s top craftsmen from 28 states. Apprentices can win a Gold, Silver, Bronze, or Safety medal for their performance. “The National Craft Championships is a great opportunity to show off the exceptionally skilled and well-trained craftsmen and women that work on Associated Builders and Contractors member jobsites,” said 2017 ABC National Chair Chuck Goodrich, president of Gaylor Electric Inc. Indianapolis. “ABC looks forward to showing off the very best the merit shop construction industry has to offer and drawing needed attention to the terrific career opportunities available in the construction industry.” The competitors from Indiana/Kentucky received the following awards:

In addition to the strong performance of our apprentices, ABC of Indiana/Kentucky received a National Best Practice Award of Excellence for our “Jump on the YouTube Train: Create Your Own Training Videos” initiative, as well as the Best Practice Champion Award for our Floorcovering Installer Apprenticeship program and Young Professionals program. Also at this awards breakfast, J.R. Gaylor, our President and CEO was recognized for his 30 years of service to the Association.

###
Associated Builders and Contractors (ABC) is a national construction industry trade association established in 1950 that represents nearly 21,000 members. Founded on the merit shop philosophy, ABC and its 70 chapters help members develop people, win work and deliver that work safely, ethically and profitably for the betterment of the communities in which ABC and its members work. Visit us at abc.org.

Indianapolis, IN 2/20/17. ABC of Indiana/Kentucky member Gary Hobbs, CEO of Black and White (BWI) Contractors, will be chairing a small, national business group focused on real estate development in urban distressed committees and how that can create economic opportunities for those within those communities.

Overall the group discussion focused on ways to empower and revitalize distressed communities through economic development so that all Americans, including African Americans, can improve their quality of life.

Gary Hobbs is a native of Louisville and his company is based in Indianapolis. He formerly served on the ABC Indiana/Kentucky Board of Directors.

Associated Builders and Contractors (ABC) of Indiana/Kentucky represents commercial and industrial contractors, who believe in the merit shop philosophy. ABC Indiana/Kentucky and 69 other chapters around the country help members develop people, win work, and deliver that work safely, ethically, and profitably for the betterment of the communities in which ABC and its members work. Visit us at www.abcindianakentucky.org and www.abc.org

We are still full of excitement surrounding the historic action of Governor Bevin and the Kentucky legislature to pass Right to work and full repeal of Prevailing Wage. It is important; however, to remember the intentional actions taken by ABC to reach this remarkable point.

The first step was the election of Matt Bevin.  Governor Bevin was suffering in the polls the summer prior to his election. Thanks to the tremendous support of our members, ABC held a significant fundraising event at the Aero Club in Louisville, during which time, Governor Bevin committed to leading the charge on Right to Work and Prevailing Wage Repeal. He never wavered from his commitment to our issues. Secondly, ABC participated in the effort to enact local Right to Work ordinances, county by county. Warren County was the first to enact such an ordinance, thanks to the political and financial support of our contractors in the Bowling Green area.  ABC provided financial support to the legal defense of the county ordinances when unions sued to stop the effort. That effort gave momentum and support to the issue around the state, which paid off in legislative action. By financially supporting key legislative leaders and through the work of ABC’s lobbyist, Marc Wilson, ABC became highly visible in the political arena.

Thanks to the strong network of Marc Wilson and our earlier efforts, ABC is grateful to see the successful passage of Right to Work and full repeal of Prevailing Wage. Our work is never done, so our next task is to protect those who took a stand for the free market, as we know they will be targets of the union building trades in the next election. Please consider making a financial contribution to ABC’s Kentucky Political Action Committee and send it to your nearest ABC Council office. *must be a personal check or from an LLC

“Associated Builders and Contractors members and their employees look forward to Chuck’s high-energy leadership during this pivotal time as President-elect Donald Trump and Vice President-elect Mike Pence, a fellow Indianan, about to take office in Washington,” said ABC President and CEO Mike Bellaman. “ABC shares the administration’s goal of creating opportunities for all Americans to play a valuable role in rebuilding our cities, highways, bridges, tunnels, airports, schools and hospitals. Chuck and Gaylor Electric’s award-winning commitment to world-class safety, innovation, workforce development and community service shows the value merit shop contractors bring to growing jobs and our economy.”
Goodrich began his 25-year career in the construction industry as an intern with Gaylor Electric in 1991 and was named president in 2014. The national electrical contractor has 13 offices in seven states. The company is an ABC Accredited Quality Contractor and has been recognized for its world-class performance, achieving the platinum level of ABC’s Safety Training Evaluation Process (STEP) program and earning 19 Excellence in Construction® Awards.

Goodrich earned a Bachelor of Science degree in building construction management from Purdue University and is a graduate of Clemson University’s Project Management Academy. He has served on ABC’s national Executive Committee for three years: as president-elect in 2016, secretary in 2015 and as the Mid-America region vice chair in 2015 and 2014, which includes members and chapters in Indiana, Kentucky, Michigan and Ohio.
A leader in the business community, Goodrich is chairman of the Riverview Health Foundation and chair-elect of the Purdue Construction Advisory Board for Building Construction Management. He is a member of the National Honor Society for Construction, Metro Indianapolis Coalition for Construction Safety and Design-Build Institute of America. He has been recognized for his leadership and philanthropy with the James J. Leonard Memorial Award, the ABC Outstanding Chapter Support Award and the Gaylor Optimist Award, as well as being named Business Person of the Year by the City of Noblesville. Goodrich also participates in the Noblesville Chamber of Commerce and All Pro Dads.

Associated Builders and Contractors (ABC) is a national construction industry trade association established in 1950 that represents nearly 21,000 members. Founded on the merit shop philosophy, ABC and its 70 chapters help members develop people, win work and deliver that work safely, ethically and profitably for the betterment of the communities in which ABC and its members work. Visit us at abc.org. 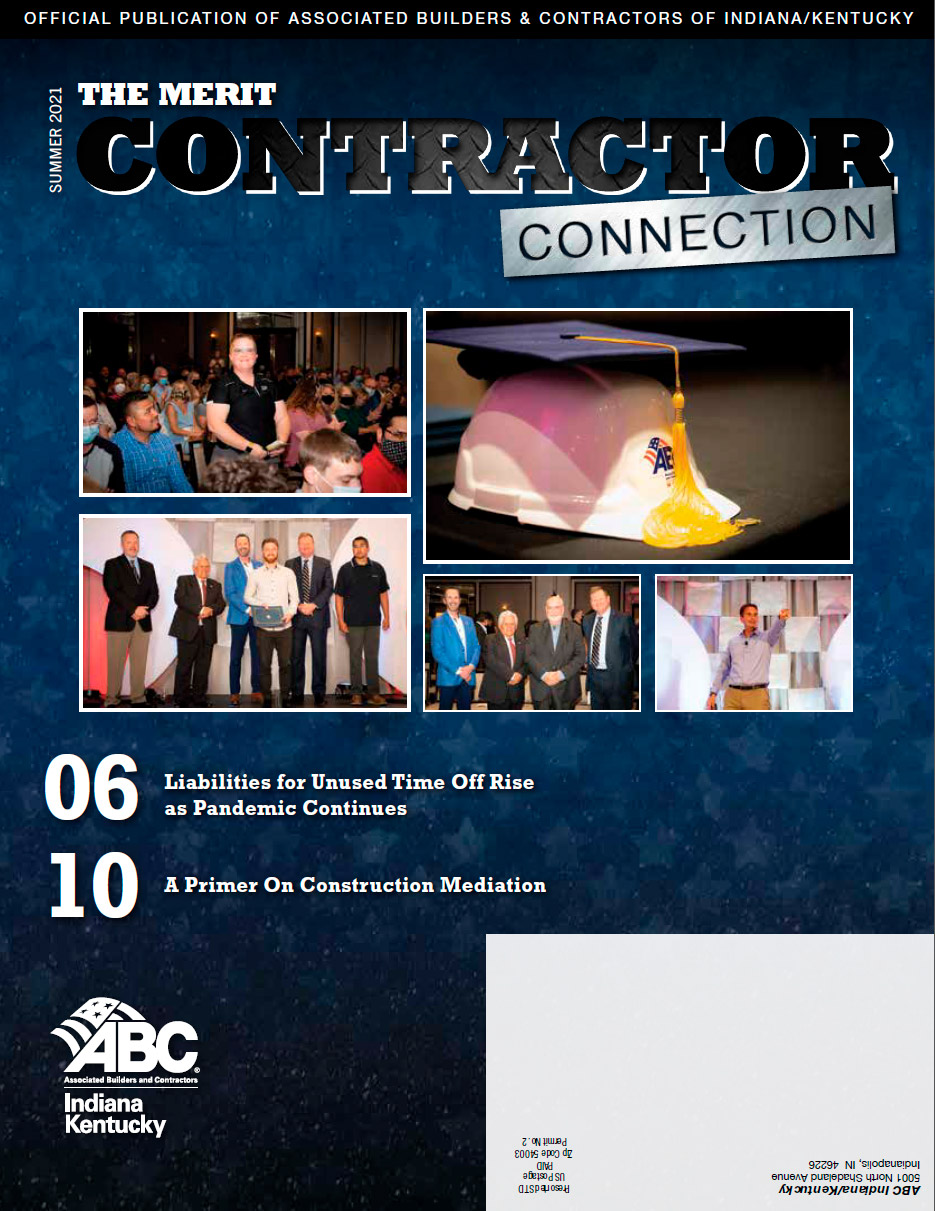