Applications are now open! Please click on the button that applies to you. 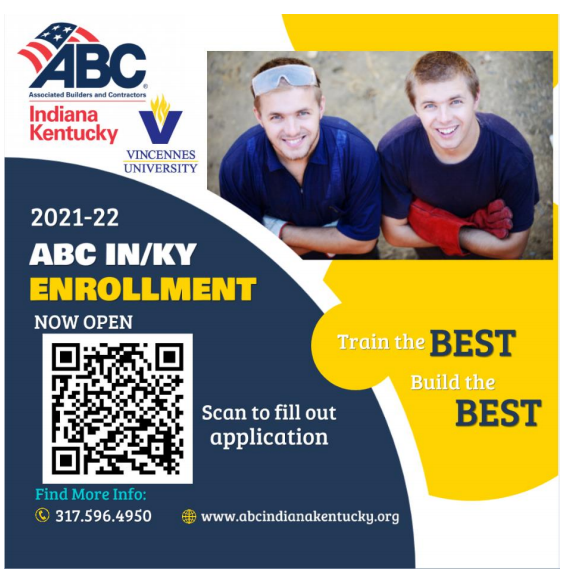 ABC of Indiana/Kentucky (ABC) is a provider of formal construction apprenticeship programs through the U.S. Department of Labor, Office of Apprenticeship. ABC is also an NCCER Accredited Training Sponsor and, as such, awards globally recognized craft credentials and certificates upon completion of each level of study. ABC is a federally certified training program by Veteran Affairs.

ABC’s Apprenticeship Program is certified by the Federal Department of Labor, Office of Apprenticeship and accredited by NCCER, the globally recognized construction curricula provider. After successfully completing the ABC/NCCER curriculum and documenting 8,000 hours of On-the-Job Learning (OJLs) for 4-year programs, graduates are registered with the U.S. Department of Labor and are awarded their journeyman’s certification. Although most trades require four years of study, some trades are two or three year programs of study. Through ABC’s articulation with Vincennes University, apprentices in Indiana can also earn a tuition-free Associate Degree in Science Career/Tech Degree.

The following apprenticeships are available through the locations below:

Click on the trades below to learn more about the NCCER curriculum for each craft.

Boilermaking is a four-level curriculum that meets the requirements of a boiler- maker apprenticeship program (4 years and 8,000 hours of on-the-job-training). If a trainee completes all four levels, he or she can be a journey-level Boilermaker, with specialized skills and opportunities for career advancement.

Carpenters make up the largest building trades occupation in the industry and those with all-around skills are in high demand. Carpenters are involved in many different kinds of construction activities, from building highways and bridges to installing kitchen cabinets. Carpenters construct, erect, install, and repair structures and fixtures made from wood and other materials.

Concrete finishers place and finish concrete floors, driveways, sidewalks, curbs, bridge decks and other concrete structures.  Concrete finishers apply architectural, exposed, patterned or stamped, broomed and smooth finishes on concrete surfaces. They are skilled at repairing, waterproofing and restoring concrete surfaces. They have the knowledge to properly use dry pack grouting and epoxy materials, and understand how to cure concrete perfectly.

This curriculum introduces the trainee to a variety of trades, including carpentry, masonry, ironworking, electrical, welding, heavy equipment, and cranes.

Electricians install electrical systems in structures; they install wiring and other electrical components, such as circuit breaker panels, switches, and light fixtures, and they follow blueprints, the National Electrical Code® and state and local codes.

Electronic Systems Technicians (EST) are skilled in a variety of areas, and they work in both residential and commercial settings. They are tasked with installing lighting, telecommunications equipment, and security systems. Electronic Systems Technicians also install remote monitoring systems in commercial applications and can retrofit current systems with modernized remote monitoring technology. The skills and duties of ESTs are broad, varied, and in high demand.

Glazier graduates will be skilful in cutting, preparing, fabricating or other handling of all glass materials for buildings, fixtures and other uses. Glaziers do the glazing, setting, attachment, installation, removal of all types of glass material for buildings, fixtures and other uses. Glaziers will be capable of doing the installation, fitting fabrication and attachment of architectural metals or related products for all types of buildings.

Heavy equipment operators (HEO) not only work on regular construction building jobs, but also on infrastructure projects (roads, bridges, and ports, otherwise called non-building construction), and in mining and timber operations. A trained and experienced equipment operator provides necessary skills for any project that requires moving and transporting heavy materials, or that demands any kind of earthmoving.

Job growth within the HVAC field is one of the greatest factors in deciding to move forward with a career as an HVAC technician. The Bureau of Labor Statistics projects that the HVAC field will experience growth of 21% during the years from 2012-2022.

Industrial coatings applicators specialize in painting industrial structures to prevent deterioration. They may apply protective coatings to steel bridges to fight corrosion, or they may coat interior and exterior facilities and equipment such as storage tanks, plant buildings, lockers, piping, structural steel, and ships.

Instrument Fitters and Technicians perform key installation and maintenance functions across several industries. The field of instrumentation covers important processes and knowledge areas, including piping, tubing, fasteners, and metallurgy. Instrumentation Technicians and Fitters are familiar with electrical systems, craft-specific drawings, and are experts in the hand and power tools specific to their trade.

This curriculum will teach basic safety practices and all the tools of the trade, as well the characteristics and applications of all types of pipe insulation as well as their installation. This training also teaches the processes for sheet metal lagging and the fabrication of jacketing for piping, fittings, vessels and equipment, as well as practices for installing pipe fittings, valves and flanges.

The study of masonry is one of the world’s oldest and most respected crafts. Masonry construction existed for thousands of years.  NCCER’s three-level curriculum encompasses modules such as Mortar, Metalwork in Masonry, and Estimating.

Millwrights install, align, and troubleshoot machinery in factories, power plants (particularly the precision machinery required in nuclear power plants), and other industrial sites. They install conveyor systems, connect machinery to power supplies and piping, direct hoisting and setting of machines, and adjust the moving and stationary parts of machines to certain specifications. Millwrights must be extremely skilled at mathematics and interpreting blueprints and specifications to set machines at perfect measurements, sometimes working with clearances no bigger than thousandths of an inch. For this program, NCCER offers a five-level curriculum, which covers topics such as Millwright Hand Tools and Fabricating Shims.

A career in the painting trade can be financially rewarding and provide satisfaction for the skilled craftsperson who takes pride in a job well done. Work on the job, combined with the appropriate formal training, provides numerous career paths for professional growth in this thriving, technical industry. NCCER’s three-level curriculum covers topics such as Basic Surface Preparation, Wood Finishing, and Texturing.

Pipefitters install and repair both high- and low-pressure pipe systems used in manufacturing, in the generation of electricity, and in the heating and cooling of buildings. NCCER offers a four-level Pipefitting curriculum that covers topics such as Threaded Pipe Fabrication, Excavations, and Steam Traps.

NCCER’s Pipelayer curriculum covers all of the knowledge required for a Pipelayer to achieve success in their trade. In addition to addressing both the rigging, delivery and cutting of pipe, the Pipelayer books concentrate on other learning objectives important to the craft, including materials, elevation, site and trench safety, foundation stabilization, testing and maintenance. NCCER offers a one-level Pipelayer curriculum that covers topics such as Job Site Safety, Cutting Pipe, and Gaskets, Joints and Fittings.

Most people are familiar with plumbers who come to their home to unclog a drain or install an appliance. In addition to these activities, however, plumbers install, maintain, and repair many different types of pipe systems.

A roofer is a construction worker who specializes in roof construction. Roofers concentrate on the application of materials that waterproof and/or weatherproof buildings, designed material—as a substrate for the roofing materials to be installed on, the rafters, beams, and trusses are the frame or skeleton for the roof to be built upon.

Sheet metal workers mainly work in heating, ventilation, air conditioning, and refrigeration (HVACR), but there are many other opportunities. Sheet metal craftsmen might help build airplanes, automobiles, or even billboards. They might install hoods and vents for restaurants or build grain silos for farmers.

Fire sprinklers are one of the most important methods for protecting life and property. They provide protection 24 hours a day, seven days a week, even when building occupants are asleep or absent from the premises. But sprinkler systems provide adequate protection only if designed and installed properly. Therefore, sprinkler system installation is the primary focus of this training program.

*Classes available at each location dependent upon enrollment.

About the National Craft Championships

Craft trainees and apprentices from across the country travel each year to compete for top honors in their chosen craft. For the competitors, the National Craft Championships allows them to demonstrate their superior skills, training and safe work practices. For the training sponsors, employers and ABC chapters, the NCC demonstrates a staunch commitment to the career path the construction industry offers.

The NCC is planned and conducted by ABC’s National Craft Championships Committee. This committee consists of contractor representatives and ABC chapter and national staff.

Visit www.nationalcraftchampionships.org for the latest updates and important info to get in on next years competition.